Spotting a sale sign at a bookstore always activates a panic button in me. It never fails to elicit that heart-pounding, wide-eyed excitement at the prospect of finding a book  to add to my shelf, and after years of practice I think I’m fairly proficient at spotting a gem in the bargain bin. Still, I can never get enough of that heady feeling of getting a great book at an outrageously low price.

Just last month, after the Art inFiction book discussion, the Fully Booked Greenbelt branch was on sale, and because there was a line for our dinner table at Chili’s we couldn’t resist the lure of the bargain tables laid out in the storefront. Something shiny caught my eye as soon as I reached the table. Bingo — In the Shadow of No Towers by Art Spiegelman, and, hold your breath, at 80% off, marked down from P958 to under P200! (around $4, never mind that it’s a bit scuffed, it’s a ginormous board book!).

END_OF_DOCUMENT_TOKEN_TO_BE_REPLACED

I wanted to read The Spiderwick Chronicles after I saw the movie adaptation on HBO. I found the movie a bit twee for my taste, and I wanted to find out if i 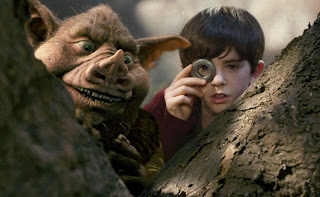 t did the books justice. Luckily I was able to mooch the complete hardcover boxed set from a member in the Netherlands, who very kindly walked to my aunt and uncle’s apartment to bring them over, along with some other books I mooched.

I was actually surprised to find that the movie covered all five books already, which was a bit of a letdown, as I was expecting a longer storyline and more adventures.

The five books were a quick read: short chapters, large fonts, no big words, and a lot of illustrations. I was able to finish the whole series in one day (with a lot of activities in between), and I think that if I was younger, I’d have enjoyed them more.

Don’t get me wrong – the story is imaginative, and I enjoyed DiTerlizzi’s detailed illustrations, but on the whole, it was much too juvenile for me.

I remember feeling the same way reading the first book of A Series of Unfortunate Events (I liked the movie, though). I find it harder to appreciate books that talk down down to the reader, even if the book is meant for younger readers. There’s a certain snootiness to the tone that annoys me, like the author / narrator is speaking slowly to make sure the reader understands all the words.

It’s still a success though, at least for its intended age group, and the authors have expanded into a second series: Beyond the Spiderwick Chronicles. I was able to read the first book, Nixie’s Song, for a review I was writing last year, and it has new characters (although Jared, Simon and Mallory appear in it too, and even cameos of Holly Black and Tony DiTerlizzi) and more faeries, so kids are bound to enjoy that too. But I like the characters in Nixie’s song better, Nick and Laurie are much more interesting than the Graces and have better dynamics.

I’d recommend the series for kids who are making the transition into chapter books, but for the same genre and roughly the same age group, I think Elizabeth Kay’s Divide series (The Divide, Back to the Divide, and Jinx on the Divide), while virtually unheard of, trumps Spiderwick big-time. 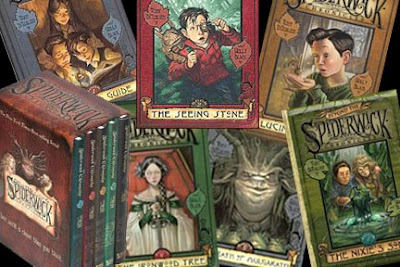 I finally finished the trilogy last night and I can’t get over the fact that it’s over, and I am posting a review in the attempt to get some closure (sniffle sniffle).Deathly Hallows spelled the end of an era for me and millions of Harry Potter fans, and I’ve long been in search of something else to sink my teeth into, but it’s often a disappointing experience (e.g. The Inheritance Trilogy [Eragon], the Charlie Bone series). The Inkheart Trilogy by Cornelia Funke was a great discovery, but it’s a different kind of fantasy, with a different feel to it, not to mention that we’re still waiting for the third installment and a final release date for the movie, for crying out loud. The Darren Shan Saga is great, too, it was even recommended by Rowling herself, but veers more towards blood and gore (not for the weak of heart and tummy!).

On a whim, I picked up The Amulet of Samarkand back in January using my 40% discount on Powercard Plus birthday blowout (thank you Powerbooks!), and then got The Golem’s Eye for a birthday present (thank you Andrea!)… And then I chanced upon a hardbound Ptolemy’s Gate at the Powerbooks VIP Sale (yahoo!)

I finally got to read the series recently, Amulet about two months ago, and then Golem’s Eye and Ptolemy’s Gate in the last few days because I simply couldn’t stop reading, even though I was supposed to be reading Aldous Huxley’s Brave New World for our discussion on Saturday (now I have to cram that).

Anyway, enough with the long intro and let’s get on with the good stuff (no spoilers, I promise).

The Bartimaeus Trilogy is a British fantasy series about an alternative London, a present-day London that is ruled by magicians, a blend of centuries-old magical tradition and modern technology. At the heart of the series is Nathaniel, a young magician; his wisecracking five thousand year old djinni Bartimaeus, and a renegade named Kitty Jones, and the forging of an extraordinary bond between these three characters.

Consistent with British magical lore (if you’ve read Jonathan Strange and Mr. Norrell, you’ll enjoy the Bartimaeus trilogy because it’s about twenty times more exciting), the book touches on magical apprenticeship, summoning magical creatures, political wars won with magic, the importance of birth names, and a host of magical creatures – imps, foliots, djinn, afrits, marids, and golems). It’s a bit darker than Harry Potter, and politics is a major theme, and there are lots of entertaining historical references, but everything ties together well with the story.

The Amulet of Samarkand starts out with Nathaniel’s apprenticeship, extraordinary magical aptitude, and his need to prove himself. Together with Bartimaeus, Nathaniel sets out to foil a government conspiracy involving the Amulet of Samarkand, with a few setbacks engineered by Kitty Jones and her team of ruffians. It’s an excellent introduction to the series, with the narrative between the perspectives of Bartimaeus and Nathaniel.

The Golem’s Eye sees Nathaniel rising in the ranks of government while Kitty Jones continues to thwart him, as her renegade group, the Resistance, wreaks trouble in the city. The second book is more transitional – it happens two years after Amulet, introduces Kitty’s perspective and establishes her as one of the central characters in the story, reveals a larger conspiracy that is a prelude to book 3, and lays out Nathaniel’s transformation into a ruthless and ambitious politician, John Mandrake.

Ptolemy’s Gate, which is easily the best of the three books, happens another couple of years later. Nathaniel is now London’s most powerful magician, and Kitty has changed her identity and apprenticed herself to a magician in her quest to learn more about Bartimaeus. Here the sinister conspiracy reveals itself, and Kitty, Nathaniel, and Bartimaeus must all overcome their personal differences and work together to save London and set things right. The book reveals a large part of Bartimaeus’ story, gives the wake up call that Nathaniel needs to regain his old self, and explores the relationship between human and djinn, building up to a thrilling climax that effectively concludes the saga.

It’s a perfect blend of all the right elements – humor, history, politics, ambition, adventure, excitement, survival, and compassion, and a great story that is contained completely within the three books, with a sense of finality to it, even though you want it to go on and on. I kept rereading the last few chapters because I couldn’t believe it was over, something that I haven’t done with a book in a long time.

Ok, now someone else should go read it already so I can pour my heart out. Waah.