Skip to content
The Houdini Box by Brian Selznick
Book #13 for 2008
+
Houdini: The Handcuff King by Jason Lutes & Nick Bertozzi

By sheer chance, I now have two Houdini books in my possession, both from Book Sale, and although I read them a few months apart, I thought they’d go together nicely in a review. 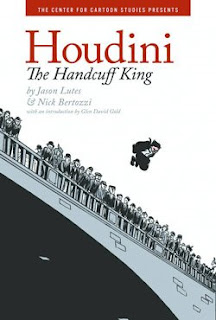 Last year I found the hardbound Houdini: The Handcuff King at the Glorietta branch, in excellent condition, for about P170. It’s a graphic novel presented by the Center for Cartoon Studies, America’s premiere cartooning school.

And then, a few months later, en route to a Christmas party in December, we happened to make a stop (bathroom break) at Cherry Foodarama, where there was a tiny book sale booth, and there I found The Houdini Box, for P60.

While both books are about the famous escape artist, Houdini: The Handcuff King is biographical, while The Houdini Box is about a boy who idolizes Houdini.

I like both books because they offer a rich visual experience.

Houdini: The Handcuff King is a graphic novel, in vintage style, done in a monochromatic pen and ink, tinged with blue shadows. I like the way the visual narrative plays out, as well as the interesting perspectives the panels take on — of course, since it’s a CCS publication, they know what they’re doing.

I also like the back portion of the book, where key details of the novel are discussed, shedding light on their context: Boston and Cambridge, Massachusetts in 1908; locks of the time and how Houdini picked them; Bess Rahner and Harry Houdini’s lo 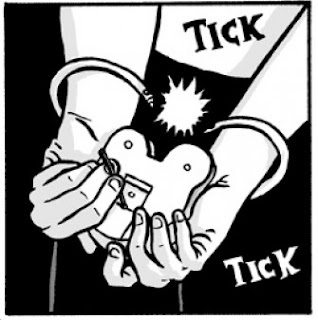 The CCS ad on the back page is great too, visually outlining the cartooning process from idea to production.

The Houdini Box, although not strictly about Houdini, has a charm of its own. The story is about Victor, a boy who idolizes Houdini. When he runs into Houdini at a train station, he begs the escape artist to teach him his secrets, and the answer comes a few weeks later, in the form of a mysterious box. The story is short, funny, and engaging, and captures the magic of Houdini.

The Houdini Box comes before the Caldecott-winning The Invention of Hugo Cabret, but it is clear that Brian Selznick has his own magic in storytelling. His trademark pencil drawings come alive on the page, and his skewed proportions add character to the art. 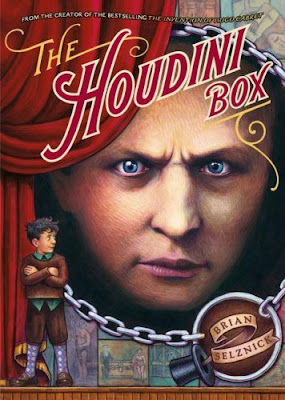 Houdini is one of the most interesting personalities of the 20th century, and both books certainly do him justice.