I wasn’t planning on reading this new Princess Diaries spinoff series, but I was on such a high from”Royal Wedding” that I ended up reading this book, in the hopes of getting more of Mia and Michael.

“From the Notebooks of a Middle School Princess” is the first in this middle grade Princess Diaries, revolving around *surprise, surprise* (sorry, spoilers), Mia’s long-lost half sister, Olivia Grace Clarisse Mignonette Harrison. Olivia Grace is twelve and thinks she’s pretty ordinary, until the day she finds out she’s a princess.

END_OF_DOCUMENT_TOKEN_TO_BE_REPLACED

I realize I’ve read a lot of Lemony Snicket in the last few months, without really meaning to. I must confess that I was not a fan of A Series of Unfortunate Events (although I loved the movie), so I didn’t feel compelled to read more than the first few books.

This Lemony Snicket phase started when his collaboration with illustrator Maira Kalman caught my eye: Why We Broke Up (not as Lemony Snicket but as Daniel Handler) and the picture book 13 Words. Then I remembered I also had a copy of the picture book, The Composer Is Dead, illustrated by one of my new favorites, Carson Ellis. And then I saw Lemony Snicket’s latest book at the bookstore and figured I might as well review these books all together, so I also got a copy of Who Could That Be At This Hour?

END_OF_DOCUMENT_TOKEN_TO_BE_REPLACED

Lane Smith (of The Stinky Cheese Man and Other Fairly Stupid Tales, Hooray for Diffendoofer Day, The True Story of the Three Little Pigs and many others) is one of my all-time favorite illustrators, and I’ve got a growing collection of his books (mostly the result of foraging in bargain bins!).

I’d been eyeing the book The Very Persistent Gappers of Frip by George Saunders (illustrated by Lane Smith) at a specialty bookstore for ages. Earlier this year, I finally scored a copy at one of the book store sales for only P59!

END_OF_DOCUMENT_TOKEN_TO_BE_REPLACED

Pardon the sporadic posts. I’m still not feeling quite up to scratch but I know need to whack away at the growing pile of books I have to review or else I’ll never catch up.

The Venetian’s Wife, subtitled “A Strangely Sensual Tale of a Renaissance Explorer, a Computer, and a Metamorphosis,” is another epistolary tale from Nick Bantock, tracing the email correspondence between a museum researcher, Sara Wolfe, and N. Conti, a centuries-old ghost trapped within the confines of modern technology. Conti hires Sara to track down the pieces of a peculiar art collection, and Sara discovers more of herself — and her destiny — in the process.

END_OF_DOCUMENT_TOKEN_TO_BE_REPLACED 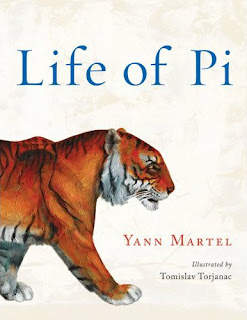 In May last year, the Flippers’ first book discussion was on the book Life of Pi by Yann Martel.

Before the discussion, I’d seen the book around but never felt the urge to pick it up. I rarely pick up books with spiritual/ inspirational themes because they trigger an involuntary gag reflex in me, so I was dreading reading this book.

Surprisingly, the gagging never came because I actually liked the book. Not in a love-it-to-bits sense, but I appreciated it, and was glad the book discussion required me to read it.

Life of Pi is the story of Piscine “Pi” Molitor Patel, a boy of multiple religions, who is a shipwreck survivor floating adrift in the ocean on a lifeboat with a circus tiger named Richard Parker.

I like the book because it questions perception, and because it reminds us that sometimes the journey is more important than the destination.

To my surprise, I also enjoyed the book’s humor. I really appreciate good humor in a book, and I did not expect this book to make me laugh, but it did, especially the part when Pi was practicing the three religions and the family runs into all three religious leaders and his multi-belief system is revealed; the Pi Patel Indo-Canadian, Trans-Pacific, Floating Circus; the encounter with the Frenchman (whom Pi mistook to be Richard Parker at first); and the interrogation scene at the end of the book.

But this review isn’t about the story of Life of Pi, it’s about a particular edition of the book: the deluxe illustrated edition, featuring the paintings of Croatian Tomislav Torjanac.

In 2005, an international competition was launched to find an illustrator for the novel. Thousands of entries were sent in from all over the world, and Torjanac was selected to illustrate the deluxe edition. 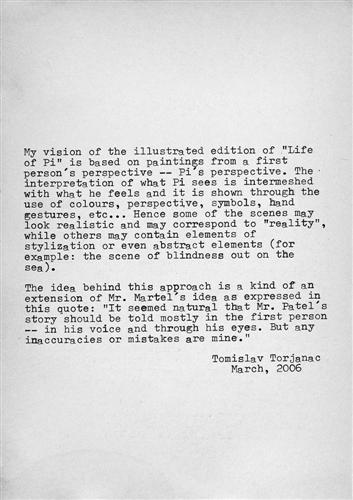 The book includes over 40 illustrations in oil, taken from Pi’s perspective (Pi is never seen in the illustrations, just his hands and feet), documenting his bizarre journey in vibrant color. 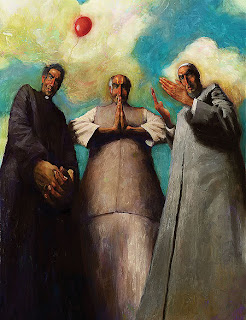 Lord, avert their eyes from me, I whispered in my soul. 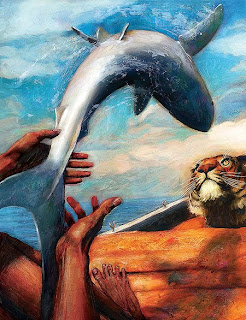 I threw the mako towards the stern. 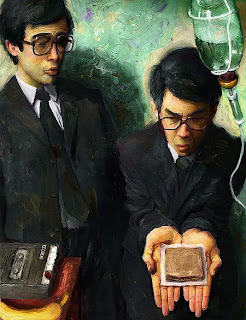 “There goes our lunch.”

I think it’s great, how Yann Martel and the publishers thought of involving readers this way. I can imagine the feeling, if for instance, JK Rowling did it for one of the Harry Potter books (or if a local publisher comes up with a Filipino translation and mounted a similar contest — hahaha, my fantasy), or if any of my other favorite books were up for illustration.

I would think it’s exciting and scary at the same time, to be given a chance to illustrate a a new edition of a book you’ve loved for a long time, with the knowledge that hundreds of people around the world have loved it too and are eagerly awaiting your illustrations.

I remember a discussion about illustrated novels posted at Flips Flipping Pages last year. Someone commented that a lot of bestsellers are getting illustrated, and he wasn’t quite sure if it was a marketing ploy, or if readers had such short attention spans that they needed to have books with pictures. b

Those reasons probably hold true, and I say, if it gets more people to read, so much the better.

But speaking as an illustrator, I see the illustrations as an extension of the reading experience, not mere accompaniments to the text. Illustrations translate one art form (literature) into another (visual art), much like a book made into a movie, and can convey a meaning beyond the text, as the illustrator adds his or her own nuances in interpreting the text.

And speaking as a big fan (and obsessive bargain-hunting collector) of illustrated novels, I say there is nothing wrong with enjoying an illustrated book; it doesn’t mean you lack imagination or need a visual aid. It’s about appreciating it for what it is – art!

***
My copy: hardbound US (Harcourt) with dustjacket, a birthday gift from Triccie
(Back story: I lent my brother my trade paperback, he took it to his dorm and it was devoured by termites — he now grovels if he wants to borrow a book)