One book off my Christmas wishlist!

I happened to pass by a bookstore today and I couldn’t resist getting one of the books on my Christmas wishlist.

I normally have more self-control (riiight), but Fables’ cover artist James Jean was in town and he was signing autographs so I was sold. I rushed to the counter get a copy and almost didn’t make it (the booth was packing up by the time I got through paying)… but James Jean was super nice and signed my book anyway! Squee!!!

END_OF_DOCUMENT_TOKEN_TO_BE_REPLACED

and I found myself with two great graphic anthologies!

The Little Lit series is a set of comic compilations for kids, edited by the great Art Spiegelman. I have two of them, because I lucked out on new copies at bargain prices — Folklore and Fairy Tale Funnies (from the NBS Book-sak sale, P200) and It Was a Dark and Silly Night (from the Book Sale warehouse, P170). I decided to read them for the 24-hour read-a-thon because they were easy to read and I wanted to get some variety in my read-a-thon books.

When I first saw the Little Lit books, I was literally agape at their visual impact — it’s a smorgasbord of creative juices from an amazing roster of top-caliber cartoonist and children’s book artists. Even now that I’ve had the books for some time now, I still thumb through the pages with reverence. It’s like holding an art gallery in your hands!

Revealing the actual stories would take away the fun from reading the Little Lit books, so let me just touch lightly on them, so you have an idea of what’s inside. 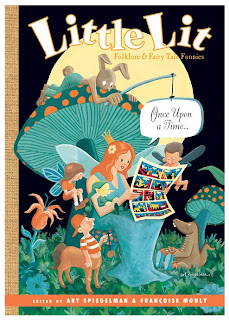 Folklore and Fairy Tale Funnies (book #61 for 2009) showcases a humorous collection of old and new story selections from different parts of the world, told through comics. 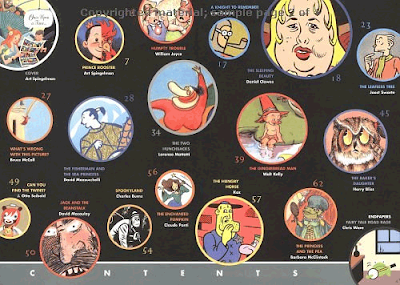 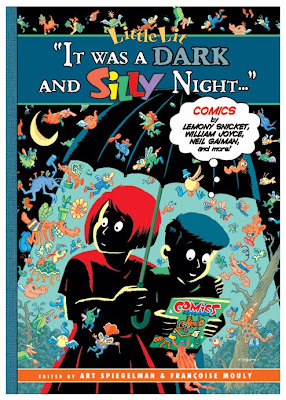 This time, the masterminds are not only comic book artists and children’s book illustrators, but also novelists such as Neil Gaiman and Lemony Snicket.

My favorite selections from this book include Lemony Snicket and Richard Sala’s hilarious story about a girl and the Yeti, J.Otto Seibold and Vivian Walsh’s penguin treasure story, and Patrick MacDonnell’s moon story.

I still lack Strange Stories (my cousin Dianne has this one, though, I must borrow it sometime) and the Big Fat Little Lit collection. Hopefully I’ll get lucky and find bargain copies again for my Little Lit collection one day; they cost about P800 each at the bookstore.

***
My copies: both hardcover

I’ve been looking for this book for ages, and I temporarily lifted my book-buying moratorium because I chanced upon it at book sale (I love you guys, whoever’s behind the store, even though that beatrix potter book I’ve requested online from you still hasn’t been confirmed, and that was a whole year ago!)… Whee!

I discovered The Stinky Cheese Man and my love for Lane Smith when I was taking Illustration classes under Panch Alcaraz, when she lent me the book to use as a reference for my thesis. I’ve been looking for it for three years now (heartbroken at the INKmas party, when someone turned it in as an exchange gift, and it missed me by a couple of persons during the passing), and I finally have it! Yehey!

To those not familiar with the book, it’s an irreverent parody of fairy tales, one of the best examples of post-modern children’s books today, deconstructing not only the fairy tale but the concept of a book as well. It’s funny in a way both kids and grownups can enjoy (Chickoy and I had a fun time reading it together!), no matter how many times you read it.

***
My copy: hardcover with dust jacket, from Book Sale