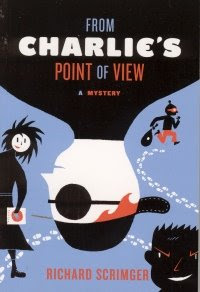 From Charlie’s Point of View by Richard Scrimger

I had high hopes for this book because it had such an original premise: the Stocking Bandit has been on an ATM robbing rampage, and Charlie’s dad has been arrested because the police are convinced he is behind the crime.

As if that isn’t enough for a kid to deal with, Charlie happens to be blind. With the help of his friends, Charlie must find the real Stocking Bandit — and fast!– before it’s too late for his dad.

As YA books go, it’s a good blend of relevant themes, such as dealing with a disability, friendship, family, and bullying, but the multiplicity of themes also works against the book, as it draws the story away from the mystery. As a whodunit, it doesn’t quite take off because it tries to tackle so many themes that only bog down the book.

It takes forever to before the action and the actual sleuthing starts, and while the main premise of the book is a blind sleuth (which, to me is so cool), the actual sleuthing isn’t all done by Charlie. I understand that he needs his friends to act as his seeing guides, but they end up stealing a lot of the thunder. The book is entitled From Charlie’s Point of View, and yet the story’s point of view (the persona) shifts to his friends Bernadette and Lewis every few chapters and it annoyed me because I think it leaves the main character, Charlie, short-changed.

The book design is thoughtful; I think the braille patterns and the blank spreads signifying Charlie’s blindness were great details, but it takes more than that to hold a reader’s attention.

This is the second book I’ve read in Dutton’s Sleuth line — the first was Lulu Dark Can See Through Walls, which was average — and I’m getting quite disappointed. I think I’ll pass the next time I come across another title from this series.

***
My copy: hardcover with dust jacket, P50 from the Fully Booked sale table, now on my BookMooch inventory.