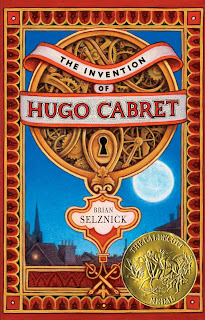 The Invention of Hugo Cabret by Brian Selznick
Book #32 for 2009
After a couple of years of reverently stroking this book every time I saw it at the book store (and bitterly regretting the time I saw a copy at National for P399 and didn’t buy it) I finally have a copy, thanks to my boss and to Scholastic.

The Invention of Hugo Cabret was awarded the 2008 Caldecott Medal, and was the first non-picture book (in the traditional sense) to win this honor. The story is told in over 500 pages of pictures and words, with 284 pages of Selznick’s trademark monochromatic pencil sketches framed in black.

Selznick, writer and illustrator of The Houdini Box, The Boy of A Thousand Faces, The Robot King, and illustrator of over a dozen more books, describes Hugo Cabret as “not quite a picture book, and it’s not really a graphic novel, or a flip book, or a movie, but a combination of all these things.” 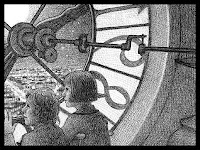 Hugo Cabret is an orphan who lives in a secret room in the clock tower of a train station in Paris. Because he is neglected (and eventually deserted) by his uncle, the timekeeper at the train station, Hugo learns to steal to survive, and takes over the task of winding the clocks at the station.

Across the station is a small toy shop run by a grumpy old man and an eccentric old man, with a girl whose nose is forever buried in the book. Little does Hugo know that as he ventures out across the street, secrets will unfold as their paths cross.
From cover to cover, I was in awe of this spellbinding book, which flows seamlessly from text into illustrations as it tells its intricate tale. I think this shows the amount of planning Selznick put into the book, with each element deliberate, each serving a purpose towards the advancement of the story.

Compared to The Houdini Box, the illustrations are rougher and darker in Hugo Cabret, but serve well in establishing the cinema noir feel of the story and still showcase Selznick’s mastery of light and darkness. I love how Selznick’s illustrations zoom in and out on the details, and how each drawing leads into another, drawing excitement with each turn of the page, especially during the chase sequences, and when clues to the puzzle are revealed. 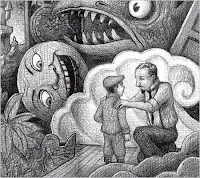 I also like how the book is enriched with history, paying tribute to the movie great Georges Melies, as well as book illustrator Remy Charlip. This adds even more dimensions to the book,on top of the overarching mystery, but Selznick manages to tie it all in very well.
And I have to point this out — because I wanna throw around some bookspeak I learned last Saturday — the book is exquisitely made — heavy grade paper, stitched section by section, and hollowback with a real headband!

I am sad, though, that I read this book after The Arrival, because had I read Hugo Cabret first, I would have enjoyed the book more . Since the book is hugely plot-driven, I felt it was a bit lacking in depth and character development; a bit more introspection from Hugo’s character would have placed the two books on a more even plane. 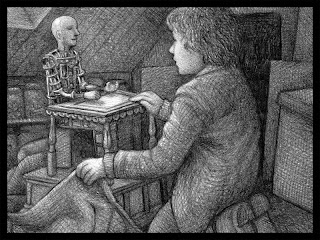 Despite that small sentiment on my part, I still give full marks for the book for breaking new ground in books for young readers, especially in illustrated novels. Selznick is definitely in the hall of fame in my bookshelf, and I look forward to collecting more of his works. 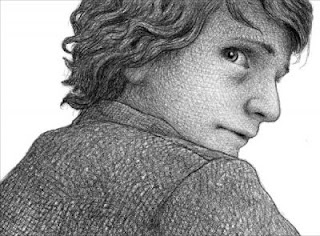