Skip to content
I’ve never read Noli Me Tangere (book #55 for 2009, book #10 for the Diversity Challenge : Filipino novel) outside of our class requirements in high school and in college, and so it was at the top of my list for this year; I really wanted to read it for leisure.

Upon the recommendation of my Flipper/BMP friend Czar, I chose the English translation by Ma. Soledad Lacson-Locsin (published by Bookmark) that I got for P100 at the Manila International Book Fair. English because I read faster in English than in Filipino, and this particular translation because I heard it was the most accurate. There is also a Penguin edition, although it’s translated by a Caucasian, so I’m not sure how it pans out, but it should be worth trying out as well. 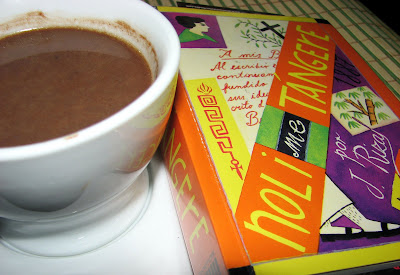 Re-reading the Noli: perfect with a cup of “Tsokolate Eh”
Lacson-Locsin explains in her introduction:

“Although translations have to be in tandem with the semantics of the age in which they are read to be appreciated, my own personal view is that they should, as much as possible, capture much of the nuances and cadence of the period in which they had been written; even at the risk of sounding awkward or stilted…

It is also my view that the heart and mind need to understand and touch the past close to its pristine form, to sense the pulse of national heritage. If the Filipino cannot truly grasp his own past he may not value his present nor ascertain his future.”

It took me about a week to finish the novel; I had a lot on my plate for the past week and I fear for my reading ratio for the next three months because I’m working on a big illustration project and I can’t exactly read and draw at the same time (unfortunately), but I am determined to get through it, even if I have to read one chapter as a reward for each finished segment of the project.

Anyway, back to the Noli. 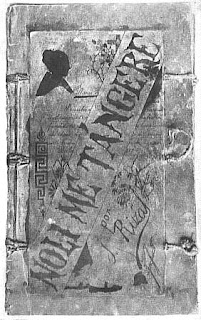 Since not all my readers are Filipino, I need to explain. The Noli Me Tangere is one of the two novels written by our national hero, Jose Rizal. A reading requirement for high schools in the Philippines, the novel was originally written in Spanish, and was a great influence on political thinking in the 19th and 20th century. It’s a bit difficult to summarize — you can read about it on Wikipedia.

I like the Noli’s coversational tone, especially in setting the scene for the novel. It starts out with the party at Capitan Tiago’s house, and the narrator, much like a tour guide, quips: “since no porters or servants ask for the invitation cards, let us go up.”

The narrator then goes on to describe the house in detail, from the interiors to the adornments of paintings and the religious statues, the magnificent spread, and even the crowd of partygoers. I love the witty descriptions and succinct observations about society:

“At the center is a long table… which seems to wink temptingly at the freeloaders with sweet promises; and to threaten the timid youth or the unsophisticated lass with two mortal hours in the company of stranger whose language and conversation tend to have a jargon all their own.” “Generally speaking, we mortals are like tortoises: we are valued for our shells.”

Idyll in an Azotea

After all these years, I still have my favorite chapter — Idyll in an Azotea.

Chapter 7, which is forever engrained in my memory as “Pag-uulayaw sa Azotea” (that sounds more romantic!), is, to this day, one of the most romantic pieces I have ever read in print, either in English or Filipino. I remember that day we read it in class, and the classroom resounded with a chorus of schoolgirl sighs, each of us imagining ourselves as Maria Clara in this jesting banter of young lovers, superimposing an image of the crush for the moment against the image of Crisostomo Ibarra. Reading it again, nearly a decade later, I am no less moved.

“Each sound from the street, each carriage that passes by causes the maiden’s bosom to throb, and makes her tremble. Ah! Now she wishes she were back in her quiet and peaceful convent among her friends. There she would be able to see him without trembling, without feeling disturbed. But, was he not your childhood friend; did you not play many games together, and even quarrel sometimes? If you who read this have loved, you will understand; if not, it is useless for me to tell you; the profane cannot comprehend these mysteries.”

The pretense of focusing elsewhere other than the object of affection upon the moment of encounter:

“Capitan Tiago and Ibarra were talking animatedly when Tia Isabel appeared, practically dragging forward her niece who was looking everywhere in the room except those at present. What were those two souls saying who were communicating in the language of the eyes, more perfectly than with the lips, a language given by the soul so that sound does not disturb the ecstasy of feeling? In those moments, when the thoughts of two happy beings are blended into one through the eyes, the word is gross, slow and weak; it is like the rude and dull sound of thunder, before the blinding flash and speed of lightning; it expresses an already known feeling, an idea already understood; and if we make use of it, it is because of the heart’s ambition, which dominates all of one’s being, and which overflows with happiness, wishing that all of the human organism with all its faculties, physical and psychic, would manifest the symphony of happiness intoned by the spirit. To a query of love by a glance, brilliant or veiled, the word has no answer: only the smile, the kiss, or the sigh.”

And the fervent reassurance and renewal of undying love:

Ibarra: Can I forget you? Would I be faithless to a vow, a sacred vow?… I took hold of your hand and that of my dead mother, I swore to love you, to make you happy no matter what fate Heaven had in store for me; and this oath I have
never regretted. Now I am renewing it. Can I forgmaet you? Your memory has always kept me company; it has saved me from dangers along the way; it has been my comfort in the solitude of my soul in foreign countries; your memory has negated the effect of the European lotus of forgetfulness, which effaces from the remembrance of many of our countrymen the hopes and the sorrows of the Motherland.

Maria Clara: I have not travelled as you have, nor do I know of a town other than your own, Manila and Antipolo. But since I bade you farewell and entered the convent I have always recalled and not forgotten you, even if my confessor commanded me to do so, imposing many penances…

And then they reveal their precious mementos of each other, Ibarra a bunch of withered aromatic sage leaves that she gathered for him, kept inside his wallet, and Maria Clara, his farewell letter, encased in a satin pouch kept on her bosom (!).

Sisa , a young woman who is a victim of her situation, a long-suffering wife and a loving mother, is one of the saddest characters I have ever encountered.

Even in the chapter in which she is introduced, before she becomes demented, you can already see how she has been reduced to a shell of a person:

“Sisa covered the scanty coals with ashes so as not to extinguish them completely, the same way a man covers up the feelings of his soul– covers them with the ashes of life which are called indifference, so that they are not extinguished by the quotidian treatment of our fellowmen.”

And with the trauma she experiences as the novel unfolds, you really wouldn’t be surprised that she loses her marbles.

I promised myself this was going to be a leisurely reading, but it’s hard to separate the novel from its political underpinnings, given the context in which it was written.

I do not have the authority or qualifications to launch into a discourse of the political statements presented by Noli Me Tangere, so I’ll just take a few quotes that struck me, and you can draw your own conclusions:

P.226, Elias: “Woe unto them who are engaged in deception and work in darkness, believing that all are asleep! When the light of day illuminates the monster of the shadows, the terrible reaction will come: so much strength bottled up over centuries; so much venom distilled drop by drop; so much lament suppressed will come out and explode…”

p.231, Pilosopo Tasyo: “If that should happen, if the enterprise fails, what will console you is the thought of having done your part. And even thus, something would be gained: lay the first stone, sow; after the storm is unleashed, some grain of wheat will perhaps germinate, survive the catastrophe, save from destruction the species which would later serve as seed for the sons of the dead sower.”

p. 298, Elias: “In life, it is not the criminals who arouse the hatred of others, but men who are honest.”

p.434, Elias: “Criminals, or future criminals — but why are they such? Because their peace has been broken, their happiness wrenched from them; they have been wounded in their most cherished affections. When they asked justice for protection, they became convinced that they can expect it only from themselves. But you are mistaken, Sir, if you think criminals only ask for it. Go from town to town, from house to house, listen to the silent sighs of families; you will be convinced that the evils the Civil Guard correct are the same, if not less than the evils they continually cause…”

Drawing to the close

I finally finished the book yesterday morning, and found it so sad I cried through the last five chapters, from “Wedding Plans for Maria Clara” right down to the epilogue — crying for the love of Maria Clara and Crisostomo, crying for Sisa’s death in her son’s arms and Basilio’s loss of innocence, and crying for the turmoil yet to come in the 2nd novel, El Filibusterismo, which I have also lined up for this year.

The Noli was even better than I remembered it, especially reading it as a work of fiction and outside of academic requirement. Hopefully this blog entry gets more people to read (or re-read) this Filipino classic.

***
My copy: paperback copy from Bookmark, crying out to be upgraded (hay, someday…)

18 thoughts on “Rereading the Noli”