“The well-known food of Provence is summer food — the melons and peaches and asparagus, the courgettes and aubergines, the peppers and tomatoes, the aioli and bouillabaisse and monumental salads of olives and anchovies and tuna and hardboiled eggs and sliced, earthy potatoes on beds of multicolored lettuce glistening with oil, the fresh goat’s cheeses…

It had never occurred to us that there was a winter menu, totally different but equally delicious. The cold-weather cuisine of Provence is peasant food. It is made to stick to your ribs, keep you warm, and send you off to bed with a full belly…

It was a meal that we shall never forget; more accurately, it was several meals that we shall never forget, because it went beyond the gastronomic frontiers of anything we had ever experienced, both in quantity and length. It started with homemade pizza — not one, but three: anchovy, mushroom, and cheese, and it was obligatory to have a slice of each. Plates were then wiped with pieces torn from the two-foot loaves in the middle of the table, and the next course came out. There were pates of rabbit, boar, and thrush. There were saucissons spotted with peppercorns. There were tiny sweet onions marinated in a fresh tomato sauce. Plates were wiped once more and duck was brought in… We had entire breasts, entire legs, covered in dark, savory gravy and surrounded by wild mushrooms.

We sat back, thankful that we had been able to finish, and watched with something close to panic as plates were wiped yet again, and a huge, steaming casserole was placed on the table. This was the specialty of Madame our hostess — a rabbit civet of the richest, deepest brown — and our feeble requests for small portions were smilingly ignored. We ate it. We ate the green salad with knuckles of bread fried in garlic and olive oil, we ate the plump round crottins of goat’s cheese, we ate the almond and cream gateau that the daughter of the house had prepared. That night, we ate for England.” 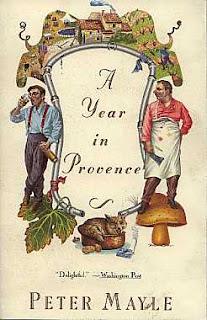 When you read about food being described like that, you’ll be sorely tempted to eat the pages off the book!

The passage is from Book #37 for 2009: A Year in Provence by Peter Mayle, who is one of the best food and travel writers I’ve ever had the pleasure of reading. It’s also my book 6 in the Diversity Challenge (memoir).

This book wittily chronicles adventures in the French countryside as Peter Mayle and his wife move into a 200-year old stone farmhouse and live as the locals do, and it takes you right there with them.

The chapters are divided into months of the year, and each chapter regales you with engaging stories of settling into life in Provence: getting to know their neighbors, their first winter, renovating the house, farming, truffle-hunting, Provencal real estate, mailbox burglary, local markets, cycling, entertaining guests, ritual kissing, goat racing, and other comic anecdotes.

The highlight of the book is easily the cuisine: whether they’re in their own kitchen, out in the garden, at the neighbor’s house, in a cafe packed with tourists, or at a little-known haunt several hours’ drive away, the food is always glorious, glorious food described so vividly you can almost taste it. 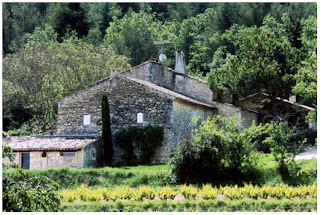 If only I could pack my bags and move in with them, I’d do it in a heartbeat!

Googling the book, I found out on IMDB that it was adapted into a BBC series… Now that would be interesting to watch. I still have several Peter Mayle books in my TBR — I think I’ve got A Good Year, Toujours Provence, Anything Considered, A Dog’s Life and Hotel Pastis in there; I look forward to reading those this year.

2 thoughts on “An exercise in self-control”