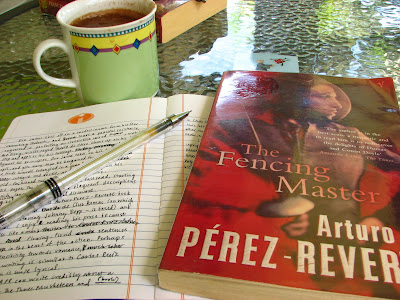 Back in my first semester at my university (don’t ask how many years ago), I took up fencing as a PE (phys ed) requirement, and for someone as “allergic” to sports as I am, I actually enjoyed the class and was passably competent at it.

Arturo Perez-Reverte’s The Fencing Master (book 57 of 2009) appealed to me not only because I find his writing intelligent; I’ve also always found fencing terribly romantic — the proprietary rituals rooted in honor and courtesy; the graceful thrusts and parries combined with a dance of intricate footwork and sprightly movement; the melodic clink of meta foils; and the immense satisfaction of making contact.

In this mystery thriller, the fencing master is Jaime Astarloa, a distinguished gentleman who is a throwback to the olden days, even in 19th century Spain. He is the master of a dying art, upholding the virtues of honorable duel at a time when pistols were fast becoming the weapon of choice and fencing was evolving into a recreational sport.

Don Jaime lives off a modest income from his few remaining students, and leads a peaceful existence, engrossed in perfecting an irresistible sword thrust, until the fiery, violet-eyed Adela de Otero shows up on his doorstep and applies for his tutelage. Grudgingly, Don Jaime takes on his first female pupil, and gets more than he bargained for as he finds himself entangled in a grand web of intrigue and deceit, and he must rely on his old-fashioned values and the ancient art of fencing to keep himself alive.

At 212 pages, The Fencing Master is a fast read, a mix of rich, languid text; highly detailed swashbuckling sequences; and political discourse.

This is the third Arturo Perez-Reverte book I’ve read; I enjoyed The Club Dumas (on which the movie Ninth Gate — starring Johnny Depp — was based) and The Flanders Panel also. I like reading Perez-Reverte’s works because he writes with flowing, florid sentences that take you into the heart of the action. Perhaps this is the Spanish sensibility towards romance showing, similar to Carlos Ruiz Zafon‘s writing, albeit Zafon is the more lyrical of the two.

I also like how Perez-Reverte can write credibly about a variety of subjects — The Three Musketeers and De Umbrarum Regni Novem Portis in The Club Dumas; chess in The Flanders Panel; and fencing in this book, not to mention a host of other novels that carry other motifs. I appreciate the research he undertakes for each novel because they don’t appear halfhearted or contrived.

I love Don Jaime’s character — elegant, refined and upright, never compromising his values nor his genteel ways. I found it sad that he appeared to be born into the wrong era, with his dapper, turn-of-the-century suits; the old house adorned with dusty memorabilia; empty fencing gallery displaying rusty swords; and his passe art.

“Duels with foils are rare events, given that the pistol is so much easier to handle and does not require such rigorous discipline. Fencing has become a frivolous pastime… Now they call it a sport, as if it were on par with performing gymnastics in your undershirt.

In this century and after a certain age, dying a proper death is becoming increasingly difficult.”

The hitch with reading Perez-Reverte’s novels in succession, though, is being able to detect a formula in his writing. He likes a lengthy exposition, peaking sharply and falling fast too. He also likes to gamble with shocking twists towards the resolution, which don’t always pay off.

Despite this drawback, I still find Perez-Reverte to be one of the better writers in the spectrum of multiple-book mystery writers. I still have a bunch of his books in my TBR, and I look forward to reading them in the future.

***
My copy: trade paperback, mooched from the UK

One thought on “A Swashbuckling Thriller”