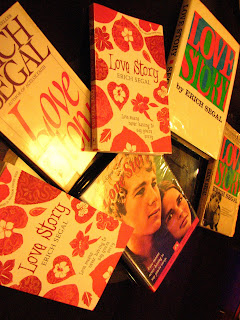 Reading Erich Segal’s Love Story was like running into an old friend I hadn’t seen in a long time.

It must be ten years since the first time I read this book, back in second year high school, a time when all we ever wanted to read were books about undying love, books that make us gush and sigh and cry and wish that someday we’d be able to experience the things we read about (oh, but that is another story…).

I was actually dreading reading this again, because I felt I’d outgrown it already, and if it were not for the Flips Flipping Pages discussion, I wouldn’t have read it again, because the mere sight of the book actually had me snorting in derision.

I didn’t have a copy of the book, and I’d seen dozens of copies of it at Book Sale in the past, but of course, as luck would have it, no copies were to be found now that I needed it. I’d once again proven the law of Book Sale: the amount of urgency applied in seeking out a specific title at book sale is directly proportional to the possibility that it (and multiple copies, too) will turn up when you no longer need it or already have a copy. I ended up mooching a hardcover copy (yes, of course, if I have to mooch internationally, I’d rather have a hardcover) from California, and got it just in the nick of time, the day before the discussion.

To my surprise, I got through the whole book without a single derisive snort! Rereading it was much better than I expected. Though I wasn’t reading it with the eyes of a thirteen-year old girl anymore, I actually still liked it.

It’s the simplicity of the story that has given this book its staying power: rich boy meets poor girl, they fight for their love, but the triumph is short-lived as the girl gets sick and dies tragically young (oops, is there anyone who doesn’t know how Love Story goes?). I agree with our discussion moderator, Czar, when he said that Erich Segal knew when to rein himself in, just short of the point of being mushy.

Like Jenny, I love Oliver Barrett III’s name and numeral (hahaha!) — who wouldn’t? He’s smart, rich, handsome, athletic, and even his rambunctiousness adds to his charm. Jenny Cavilleri, on the other hand, is exactly the girl who can whip his cute little tosh into submission, with her snooty demeanor, smart-ass mouth and artistic temperament. The highlight of the book for me was the playful banter between the two, and the fact that Jenny always got the final word.

Yesterday, we also watched the movie and I was surprised to find out that the screenplay actually came before the book, and Segal actually just wrote the book to promote the movie. The book was mostly faithful to the movie, except for the point of view, but I felt that the final scene was better in the book.

One of the points raised in the discussion was that the movie was actually more realistic, because relationships (in this case, Oliver and his dad’s relationship) don’t get fixed just because someone dies, and closure doesn’t come that easily. While I see their point and agree with it in essence, I don’t think that was what the book meant to say. In the book, as Oliver cries in his father’s arms, I didn’t see Jenny’s death as a cure-all for their relationship, but rather an opening to reach out to each other, and merely the start of Oliver’s coming to terms with Jenny’s death.

“Love means never having to say you’re sorry” (note: in the book it’s actually, not ever, not never) is probably one of the most trite expressions about love today, and while I am not in the position to debate its meaning, I guess it’s not the line’s fault that several generations of readers (and film viewers) all over the world have used it for almost 4 decades now.

I didn’t expect to say this, but I’m definitely keeping this book. 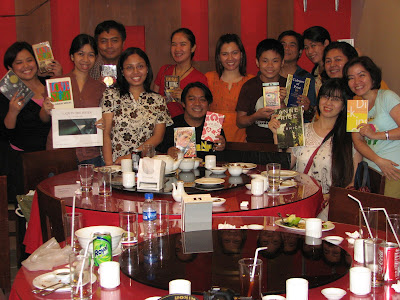 Flippers celebrate V-day with Love Story at Red Palace!
***
My copy: hardcover first edition with dustjacket
My rating: 4 out of 5 stars