Skip to content
I know I just did a picture book roundup, but I’m really excited to share two picture books I got this weekend, both a deconstruction of the story of the Three Little Pigs: The True Story of the Three Little Pigs by A. Wolf as told to Jon Scieszka, illustrated by Lane Smith; and The Three Pigs (book #54 for 2009), written and illustrated by David Wiesner.

I have had a fascination for postmodern picture books since I was in college, and I have a growing collection of them. It totally revolutionizes picture books as we know them, and it’s great genius on the part of the writers and especially the illustrators.

Now, I’ve long been a fan of Lane Smith, especially when he’s teamed up with John Scieszka, because they just make me laugh out loud! I have a growing collection of their picture books, starting with The True Story of the Three Little Pigs, The Stinky Cheese Man and Other Stories, Squids will be Squids, Cowboy and Octopus, Pinocchio, and Math Curse. I think I’m just missing a few – Science Curse, the Abe Lincoln book, and Seen Art?.

I’ve had a paperback copy of The True Story of the Three Little Pigs for around 4 years now, but when I saw the hardcover, 10 year anniversary edition of the book at Book Sale for only P120, I just had to have it (never mind that I bought the paperback full price, for more than twice the amount. 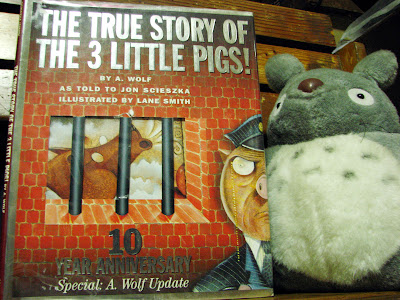 He pleads not guilty, stating, “Hey, it’s not my fault wolves eat cute little animals like bunnies and sheep and pigs. That’s just the way we are. If cheeseburgers were cute, folks would probably think you were Big and Bad too.” 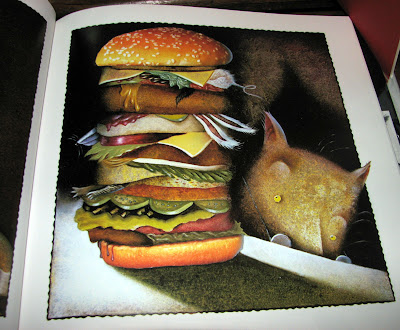 cheeseburger: wolf version
A. Wolf, or Alexander T. Wolf, shares his side of the story, the real story, he says, which is about a sneeze and a cup of sugar.

Apparently, he was making a birthday cake for his granny when he ran out of sugar, so he went over to the pigs’ house to borrow a cup of sugar. The problem is, he had a bad cold, and when he sneezed, the first two houses – the one made of straw and the one made of sticks – collapsed on top of the their owners, and the wolf thought it would be a shame to let some perfectly good ham go to waste.

The third house was brick, though, and the wolf had a nasty exchange of words with the third pig, who wouldn’t lend him a cup of sugar for his dear granny’s birthday cake. So he huffed, and he puffed… and that’s how the cops found him.

He says that the cup of sugar story wasn’t exactly breaking news, so the police jazzed up the story and he became famous as the Big Bad Wolf. 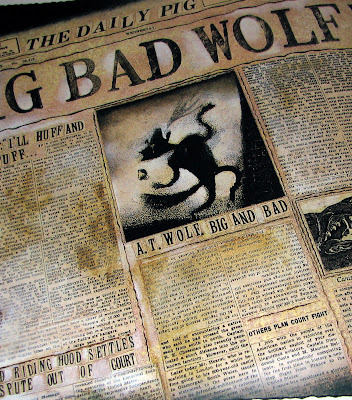 breaking news!
Lane Smith’s rich, textured illustrations make the story doubly funny, adding little (sometimes morbid) jokes into the illustrations. The 10 year anniversary edition, which I now have, throws in a few more laughs: there is a letter from A. Wolf complaining his ten-year imprisonment and decrying the testimony made by a certain girl in a red riding hood. The back of the book has also been vandalized with different opinions on the case. 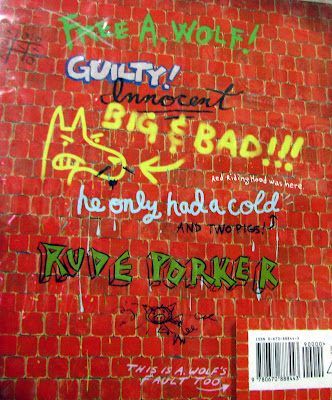 wall graffiti
Now that I’ve “done a Blooey” on this book, i.e. upgraded yet another paperback into hardcover (in Flippers/Moochers terms), I now have a spare copy of the book (in pristine condition), but I think I already have someone in mind for the book. I’ll have to find out if that person has this already, or else it’ll go into my BookMooch inventory.

By the way, I’m really loving how hardcover picture books from the US have “reinforced binding” that make them good for lots and lots of readings. Hopefully my (future + hypothetical) kids get to appreciate my growing collection of picture books, which ran out of shelves, like, several dozen books ago. I wish they’d devise the same type of binding for other types of books.

My second book for today is The Three Pigs by David Wiesner, who has fast become another one of my favorites, ever since I found a battered copy of Tuesday in a bargain bin (I think the one I mooched got lost in the mail). 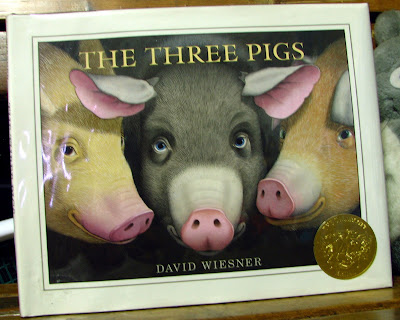 According to the jacket, “Ever since the pigs took to the air at the end of Tuesday, he [Wiesner] has wanted to give them a book of their own” – hence The Three Pigs, which received the 2001 Caldecott Medal. It amazes me how this guy just racks up the Caldecotts.

Before reading this book, I’d have thought The True Story of the Three Little Pigs would be a tough act to beat, but Wiesner does a great job with this book. Aside from deconstructing the story, The Three Pigs deconstructs the actual structure of the book, with a touch of metafiction, as the characters become aware that they are characters in a book.

When the two pigs reach the third house, the third pig is surprised because they haven’t been eaten up. They knock away some pages of the book, fold it up, make a paper plane and have the time of their lives, until the plane crashes into a crumpled heap. 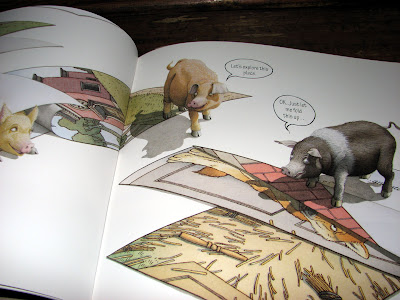 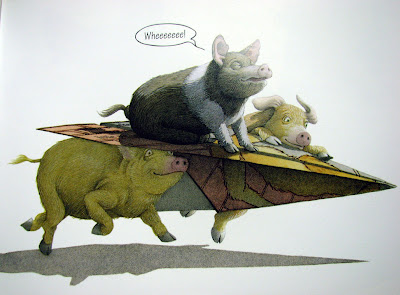 My favorite scene — the paper plane ride
The three pigs find another story and they enter it – it’s Hey Diddle Diddle. They get out of the story and the cat with the fiddle follows them out. They enter another story, this time with a dragon, and they save the dragon from getting slain by taking him out of his story.

The pigs finally go home to their story, and piece it back together so that the wolf gets to the brick house, and when he huffs and puffs and is unable to blow down the house, the dragon pokes his head out and the letters from the text get scattered. The pigs decide they’ve had quite enough and leave the wolf outside while they (pigs + cat + dragon) all head inside to have some soup. 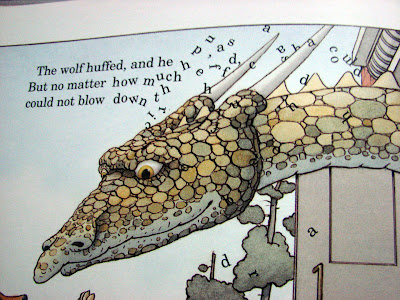 Dragon’s head butts into the text, scattering the letters
I love how smart David Wiesner’s books are, and this one reminds me of one of my favorite book series, Jasper Fforde’s Thursday Next series. I like how the pigs defy the structure of the book, jumping from one story into another, ultimately taking charge of their fate.

I also love how Wiesner uses different styles to establish the jump from story to story, and the pigs adapt to the illustration style wherever they are situated— from the vintage style of The Three Little Pigs, the realistic style of the “space” outside the books, the simplistic style of the nursery rhyme book, and the coloring book style of the dragon story. When the pigs are halfway out the story, they’re also illustrated in half-and-half styles. Wiesner is such a genius! 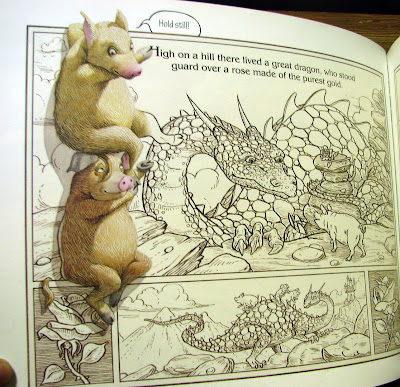 The pigs jumping into the coloring book-style dragon story
The Three Little Pigs is a great children’s classic, but it’s even better when it goes po-mo! :)

My rating: The True Story of the Three Little Pigs, 5/5 stars; The Three Pigs 5/5 stars