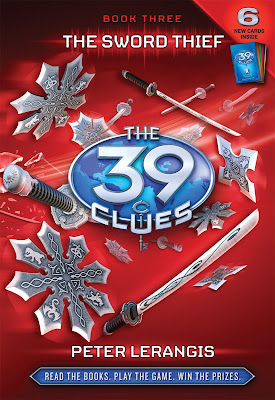 I have always thought The 39 Clues was a brilliant marketing coup on the part of Scholastic, but as I closed the cover on my copy of the third installment in the series (I was reading it for an article for Manila Bulletin, which comes out on Saturday), The Sword Thief by Peter Lerangis (Book #40 for 2009), I think the it would be safe to say that it has gotten into its groove.

I’m not sure which factors in more, if it’s Lerangis’ writing that makes the difference (he did ghost-write for my favorite mystery series, The Three Investigators) or if the mechanisms set in place by the first two books were simply put in motion, but I honestly loved The Sword Thief more than I did the first two books (I rated them both 4/5 stars, and not so much for the story but for the reading experience).

For the first two books, as action-packed as they were, I felt a certain detachment towards the text, like I was an impartial witness to the action unfolding throughout the pages. Book 3 fits in with the rest of the series (with no less than Nick and Norah author David Levithan directing the editorial team), with the trademark 39 Clues twisty chase (suspension of disbelief is a given, think National Treasure or Da Vinci Code) but to my surprise, The Sword Thief captured what I felt was lacking in the series: an added depth to the characters, and interesting dynamics between the Cahill relatives, which comes in at an opportune moment, because the cat-and-mouse, left-and-right sabotage can get pretty old after a while.

I guess Lerangis’ writing does deserve to be singled out, as he manages to add more introspection to the characters and keep up with the line of action — 20 pages under the last book, at that — and I feel that this book captured the spirit of 39 Clues most succintly.

I think it can only get better from here on, and I can’t wait for Book 4, Beyond the Grave by Jude Watson, which is out in June. Should be good, set in classic treasure hunt wonderland: Egypt!

That reminds me, I should input the cards onto my account soon and get a move on with the clues in the online game… Arrgh, the problem is the game site is sooo addictive and I can’t limit myself to an hour playing…. And I also need to get an expansion card pack soon before the new set (for the next books) is released. Ohhh, to be a kid again!

P.S. If there are any other Cahills out there, I’m a Lucian.

***
My copy: hardcover (the series is in hardcover) 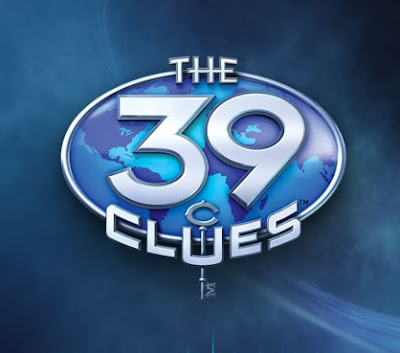 The world has never seen anything like it: Scholastic’s action-adventure series, The 39 Clues, is taking the world by storm — one book at a time. After its release in September 2008, the first book, Maze of Bones by Rick Riordan was an instant hit, gracing the NY Times Bestseller List for 10 consecutive weeks. The second book, One False Note by Gordon Korman, heralded the holiday season a few months later, debuting at #1.
More than just the books, The 39 Clues goes where no other book series has ever gone before: multi-platform interactivity, with multiple components that enhance the reading experience: collectible game cards, the online game, and even sweepstakes across several territories.

Dan and Amy Cahill are two orphaned kids who discover that they belong to a family that has produced world’s most prominent personalities, divided among the family’s four branches: Lucian is the bloodline of legendary leaders and spies, including Benjamin Franklin and Napoleon Bonaparte; Ekaterina has cultivated scientists and inventors like Marie Curie; Janus is the hothouse for cultural icons like Mozart, Picasso, and Steven Spielberg; while Tomas boasts of daring explorers and discoverers, including Annie Oakley.

The death of Dan and Amy’s grandmother, Grace Cahill, is accompanied by an unusual bequest: a choice between a million dollars, or the first clue in the quest for the legacy of the Cahill family. Choosing the path of adventure, 11-year old Dan and 14-year old Amy Cahill must outsmart the other Cahills, who will cheat, lie, and steal to get ahead in the game. 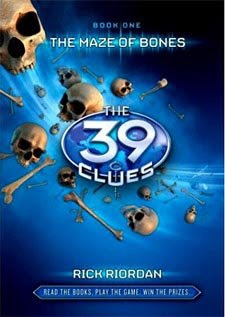 power. Rick Riordan, author of the Percy Jackson and the Olympians series, developed the story arc for the series and penned the first book, “Maze of Bones,” where Dan and Amy begin their quest with six other teams of Cahill relatives hot on their trail from the Cahill estate and all the way to Paris.

The rest of the series is distributed among different authors, each bringing their distinct style to the story, keeping the adventure fresh and exciting.

Gordon Korman, author of children’s adventure series such as “Everest”, “Island,” and “Dive,” contributes the second book in the series, One False Note, with Dan and Amy (with their au pair Nellie and their grandmother’s cat Saladin) following the second clue to Wolfgang Amadeus Mozart in Vienna.

The third book, The Sword Thief (for release in March 2009) by Peter Lerangis, is set to take the Cahills to Tokyo, while the rest of the titles in the ten-book lineup are yet to be disclosed.

Beyond the pages
Most notable about the series are the interactive components that allow the reader to join the Cahill family quest, with readers from select territories (US, Canada, UK, Ireland, Australia, New Zealand, India, Malaysia, and Singapore) eligible for winning actual prizes in the 39 Clues sweepstakes.

The 39 Clues website (www.the39clues.com) allows readers to find out the branch of the Cahill family they belong to, and granting them access to the exclusive archives of the family branch. Cahill family resources are also available for those who want to learn more about other members of the family.

The 39 Clues game is also on the website, granting users a clue at the end of each mission. Additional clues can be unlocked by entering the card sets found in each book and solving a variety of puzzles, and further on, using the expansion card packs (sold separately) containing 16 randomly packed cards, with a rare card guaranteed inside each pack. 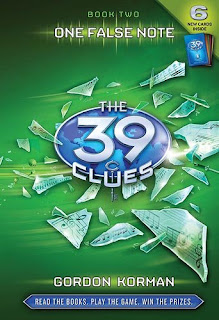 With the release of One False Note, another component was added to the series, this time a tabletop card game dubbed as Double Cross, which can be played with other 39 Clues readers with their own sets of cards from the book and the expansion packs. Players go on missions to collect Secrets and Founders cards and earn points. The first player to reach 39 points wins the game.

My take
Story-wise I found the books okay: fast-paced, thrilling — very cinematic, and everything an action adventure series should be, including the typical leaps in logic that come with these types of books. I think kids around 4th grade to junior high would love the series. My cousin Chickoy, who’s in sixth grade, enjoys it like I do, and we talk about the books whenever I visit.

I’ve never read Riordan (am not really into mythology so I haven’t tried the Percy Jackson series just yet), nor have I read any of Korman’s books (he’s got tons, he’s been published since he was in junior high!). The writing styles are very similar though, and so American, and I have a preference for British writers in the YA genre, so it’s hard to tell which of the two I like better, but judging from the two books in the series, I’m leaning more towards One False Note, which was more fluid for me.

The premise of an all-powerful family is quite ludicrous when you think about it, but I have to the think tank some credit and say, why not? It’s fiction, after all. I like the idea of the 4 branches, and it’s ingenious, the way you can take a test to find out your Cahill branch — I’m Lucian, by the way– much like Hogwarts students get sorted into their houses. 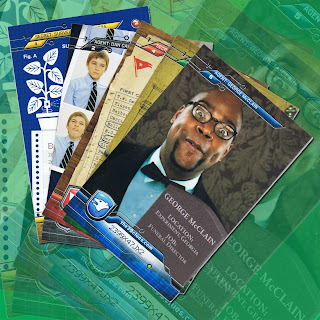 What trumps up the series for me is really the interactivity. I logged in my starter pack of cards on the website and voila, two hours later
, I was still hell bent on unlocking more clues. In this day and age, when books have to compete with so many things to grab a kid’s attention, The 39 Clues series certainly bridges the gap.

It’s an effective marketing tool too, because the cards are not reusable or share-able, but the kids enjoy them, and if it gets them to read, then it’s money well spent.

***
My copy: Maze of Bones and One False Note, both hardcover

My rating: Maze of Bones and One False Note, both 4/5 stars