I thought I’d break this blogging fast with a nice roundup, featuring books by the prolific, award-winning author-illustrator David Macaulay!

I discovered David Macaulay back in college, when my illustration teacher showed us the Caldecott-winning Cathedral (which I read along with Pillars of the Earth), and I filed him away in my mental book wishlist. Years later, I lucked out on Black and White and Cathedral while trawling through bargain bins, and I’ve been fascinated by his work ever since.

Lately I’ve been really lucky, as Flipper friend (and hatter extraordinaire) Marie got me a couple David Macaulay books for our annual FFP Kris Kringle, and I’ve scored some more titles during my frequent bookstore raids, so I’ve got a little collection going. On top of the two titles already in my collection, I’ve now got: the storybooks Baaa, Shortcut, and Angelo, and the architecture books Mill, Pyramid, Unbuilding, and Mosque.

END_OF_DOCUMENT_TOKEN_TO_BE_REPLACED

I was dragging my feet about reading this month’s selection, Ken Follett’s Pillars of the Earth (henceforth to be referred to as POTE), primarily because I didn’t expect to like it. I first mooched a copy of the book when Patti, one of my BookMoochers Pilipinas friends proclaimed it as her all-time favorite book and my curiosity was piqued, but I had the book languishing in my TBR for over a year until I lost my first copy in last year’s flood. I got a replacement a several months later, but I have to admit that if it wasn’t assigned for the book discussion, I wouldn’t have picked it up.

I’m not one to shy away from chunksters, but given the length of the book (973 pages), I started POTE one week before the discussion, figuring I’d have to read around 200 pages a day. I read the first chapter late Thursday night, and finished a few more chapters on Friday night.

On Saturday, I read the book after breakfast and on to the afternoon. I had planned to go to a friend’s bookshop opening that night, but it rained heavily and I got stuck at home because the street was flooded, and all my plans went awry. I figured I might as well make a dent in the novel (I was waiting for the street to clear out, but it didn’t until late that night), and I was reading and reading, and before I knew it, I had finished 900 pages — right up to the end of the book!

I hope you’ll indulge the lengthy post; it’s possible this book may be my best book for 2010 and I want to share the experience with you. Don’t worry, no spoilers!
END_OF_DOCUMENT_TOKEN_TO_BE_REPLACED 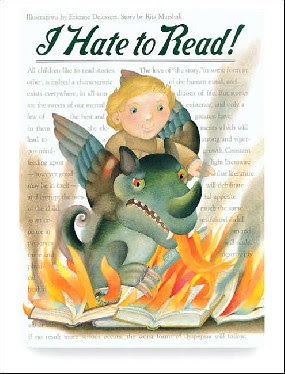 Got two new books for my picture book collection – I Hate to Read! by Rita Marshall, illustrated by Etienne Delessert, and the 1991 Caldecott Medal awardee Black & White by David Macaulay. I tell myself I collect them for reference in illustration, but I can’t deny I have fun reading them too :)

I mooched I Hate to Read! from fellow Flipper akaShy because the title was intriguing, and the illustrations appealed to me.

The story is about Victor Dickens, a kid who hates to read. One day, as he pretends to read a book so that he could watch TV, characters start jumping out to invite him to read: a crocodile in a white coat, a field mouse, a peg-legged parrot, a white rabbit wearing black boots, a frog with a broken feather in his cap, and many more.
And then his visions get stranger and stranger until he felt sad that all the characters’ stories would be lost if nobody read them.

The story didn’t quite work for me, as it didn’t build up sufficiently to the conclusion. Victor’s transition from non-reader to reader was abrupt and confusing, and so it’s not very convincing.

Etienne Delessert’s illustrations, however, save the book from being just another picture book. The watercolor illustrations have a whimsical quality that charms from the get-go, and breathes life to comical characters. I especially love the field mouse with a cat in its backpack (it’s like the Totoro Catbus with mouse headlights!)

Check it out on google books

The second book in this selection is David Macaulay’s Black and White, which I’ve been in search of for some time now (I am collecting the Caldecotts).

It’s a po-mo picture book that was given so much thought to that it boggles the mind. 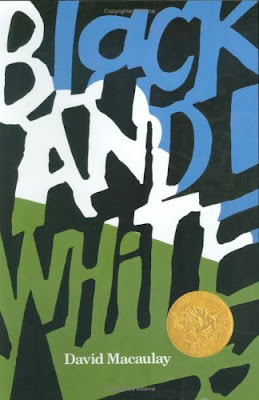 The title page greets you with a cryptic note: “This book appears to contain a number of stories that do not necessarily occur at the same time.”

Then, each spread is divided into four frames that tell what appear to be four different stories, illustrated in different styles: wash, comic, inked watercolor, and chunky paint.

The first story, on the upper left hand, is “Seeing Things,” depicting a boy on a train, whose trip is interrupted by a long delay. On the lower left is “Problem Parents,” showing a family’s life turned upside down when the kids’ perfectly normal parents come home wearing newpaper clothes. On the upper right, the third story is “A Waiting Game,” where a crowd of commuters waiting on the train platform get bored and decide to have fun with some newspapers. Finally, on the lower right, “Udder Chaos” follows an escaped convict hiding within a herd of cows.

The overlapping elements reveal that the four stories are part of another story — the convict hides in the cattle, which cross the tracks and cause the train’s delay, which the boy witnesses. At the station, waiting for the train makes the crowd desperate for entertainment, causing them to play with the newspapers. Among those in the crowd are the parents, who come home wearing newspapers, to the surprise of their children.

It’s not easy to decipher, and who’s to say these are the only interpretations of the story, as it depends on the reader’s imagination. I love how the book makes you think and pay attention to detail. In “Waiting Game” there is even a hidden story of a squirrel (smaller than my thumbnail) who joins in the merrymaking.

It’s an amazing effort, and a very nice way of opening up your mind to various possibilities.

***
My copies: I Hate To Read, hardcover, no dustjacket – mooched from akaShy. Black and White, rummaged at Book Sale for P95.