I avoided bookstores last December because I’m prone to splurging more at the end of the year (and God knows I have entirely too many books waiting for me at home) but there was one book that I couldn’t pass up buying, because of its  sheer entertainment value (for me, at least).

It’s a book entitled, “Ophelia Joined the Group Maidens Who Don’t Float: Classic Lit Signs on to Facebook” by Sarah Schmelling, who catapulted to fame with her Facebook news feed edition of Hamlet.

For an impulse buy, it didn’t come cheap (it was P600+, or over US $12) which I rarely spend on a single book unless I’m fanatically compelled to buy it; but as soon as I read a few pages into this book I knew I had to get a copy.

The book is a treat for avid readers who are on Facebook, as it is a compilation of Facebook pages of various literary characters and even some authors, much like historical tweets or other social networking site parodies.

It’s pretty hilarious if you get them, but if you’re not much of a reader, a lot of jokes will probably sail right past you — uhmm, I tried passing the book around at the office because they were wondering why I was laughing so hysterically and the jokes fell quite flat because I had to keep explaining them.

END_OF_DOCUMENT_TOKEN_TO_BE_REPLACED

I’ve been meaning to read the classic Dracula ever since I read (and reread) The Historian by Elizabeth Kostova. With all the vampire fiction that’s been coming out recently, I realized I really abhor the glamorized vampire and prefer the good, old-fashioned Dracula, and so I grabbed the chance when I spotted the Viking Studio illustrated edition featuring comic book artist Jae Lee at last year’s Cut-Price Sale at National Bookstore, for about P200, along with a copy of Jane Eyre from the same line, also P200.

I knew I read Dracula when I was in 6th grade but it must have been abridged, or maybe I covered my eyes over the scary parts (Rich Hall has a sniglet for it — “snargle” — to lessen the visual impact of a horror movie [in this case, a book] by filtering it through one’s fingers) because I don’t remember much of it.

Anyway, I had to read Dracula because I need to read the book “Mina” by Marie Kiraly, a Dracula spin-off assigned to me by another Flipper for the Flips Flipping Pages Diversity Challenge this year. I also have some more Dracula-themed books in my TBR that I’d like to read so I figured I needed to read the original for comparison.

END_OF_DOCUMENT_TOKEN_TO_BE_REPLACED

The Picture of Dorian Gray by Oscar Wilde

In Jasper Fforde’s The Fourth Bear, one of the subplots is a reference to Oscar Wilde’s only novel — The Picture of Dorian Gray, and it definitely got me curious.

Then I came across the Viking Whole Story edition at a Book Sale branch – illustrated by Tony Ross (of Francesca Simon’s Horrid Henry series) in addition to the pictorial annotations on the story’s historical, cultural, social, geographical, artistic, and scientific context. I had to pass on it because it cost nearly P400, but it was one of the first books I mooched on BookMooch, and I had to wait a couple of months for it because I had to angel mooch it from the US, etc., etc.

I always thought it was a Faustian novel in the literal sense. You know, the “pact with the devil” type of thing, like in Bedazzled or in Shortcut to Happiness or I was a Teenage Faust (LOL, I think I saw that one thrice).

The young Dorian Gray, after sitting for a painting, realizes (after Harry eggs him on) he’ll never be as beautiful, and utters a wish for eternal youth and beauty — that the painting would take all the beatings of time and age instead of having them on his person. And then it just happens – he has indirectly traded his soul for the luxury of eternal youth. 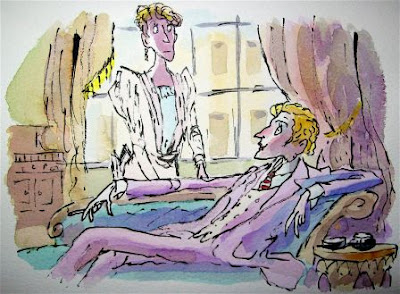 At 260+ pages and 20 chapters, I thought it would be an easy read, but as I settled into reading, I soon got bogged down by the various ideologies Oscar Wilde was espousing.

It’s the confluence of Wilde’s philosophical statements that to a degree obscure the otherwise simple storyline. As a homosexual living in Victorian times, Wilde clearly had his issues.

First was his overarching philosophy on art, leaning towards aestheticism, or “art for art’s sake.” Wilde even writes a
lengthy preface to explain his perspective,that art should have no other purpose than being beautiful, which offended sensibilities in a time when art was used as a tool for education and moral guidance.

Wilde proclaims this philosophy every chance he gets within the novel but still ends up contradicting himself, as his story is a cautionary tale of what could happen when the lines between life and art are blurred, and the high price to pay (in Dorian’s case, his soul) to achieve beauty.

Aside from that, Wilde also makes a social commentary on how superficial his circle was, and how people were often judged by their physical appearance (e.g. Dorian was the picture of purity and innocence, ergo no one believed he could’ve done the black deeds he was rumored to have done). 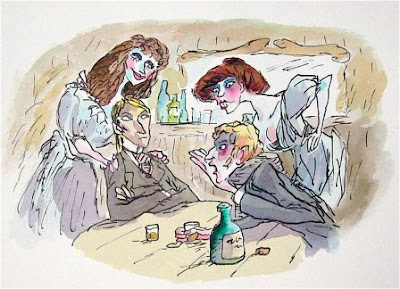 He also warns of the negative effects of influence, whether direct (as in the case of Lord Henry Wotton) or indirect (via the yellow book), and emphasizes the need for individualism and thinking on your own.

Finally, it is pretty hard to miss the homoeroticism in this book, as from the first chapter, it is clear that there was a love triangle of sorts between Basil Hallward, Dorian Gray, and Harry Wotton, and he wanted to justify homosexuality in the novel.

It was really love— it had nothing in it that was not noble and intellectual. It was not that mere physical admiration of beauty that is born of the senses, and that dies when the senses tire. It was such love as Michelangelo had known, and Montaigne, and Winckelmann, and Shakespeare himself

Wilde believed that homosexuality was not unnatural and was an indication of refined culture, as in the tradition of other great men. In the biography included in the book, it states that Wilde was tried for sodomy.

It is obvious too, that Wilde did not care much for women, as the novel is highly misogynistic — all the women characters are silly and underdeveloped. In fairness though, Sybil Vane is effective in establishing the ill effects of placing vanity above virtue.

While Wilde was a major proponent of aestheticism as he struggled to free himself and his work from the confines of Victorian society, he also wanted to push his own doctrines, and that was what made the novel as confusing as it was.

Ideologies aside, I liked the novel for its original plot and the final twist (which I don’t want to spoil for anyone). Faustian themes are always fun to read, and I looked forward to the times Dorian would inspect the painting for changes

I also enjoyed The Whole Story edition of the book for Tony Ross’s comical illustrations, as well as the collection of images that explained a lot of the novel’s context, although I think the layout could still be improved, as it was distracting at times.

Took me a while to digest it, but I’m glad I read the book — I just googled for film versions and there is a Dorian Gray movie coming out this year, and it promises to be a good adaptation, judging from the cast: Colin Firth as Lord Henry Wotton (rats, he’s always doing gay roles no 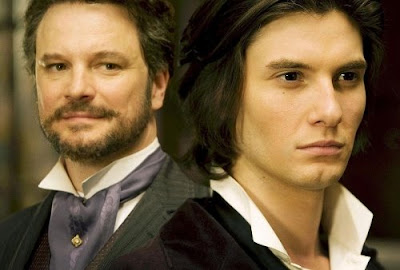 w); Ben Barnes (Prince Caspian) as Dorian Gray; and Rachel Hurd-Wood (from Perfume) as Sybil Vane. It’s a British production; I do hope they show it here.

***
My copy: full color paperback, mooched from the US